It’s the Pinch of Nerd podcast and it’s all about The Simpsons. Also food. It’s also about food. Food and The Simpsons. You know we had to get to it sooner or later and it must be later because The PONers finally talk about this corner stone of culture. The tasting trio has one of the most amazing, life changing discussions about The Simpsons with revelation after revelation. Too bad you’ll never hear it though because J. Allen forgot to hit record. Instead, you’ll be treated to a quick, meandering discussion which occasionally touches on The Simpsons but mostly features stories of drunken escapades. Chef Aaron presents his delicious recipe for chorizo and potato taquitos which will actually change your life because they are very tasty and easy to make! 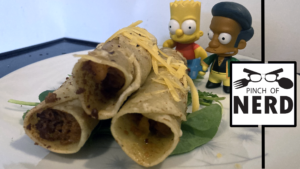